What’s In, What’s Out On AIP? Answers To Tricky Foods 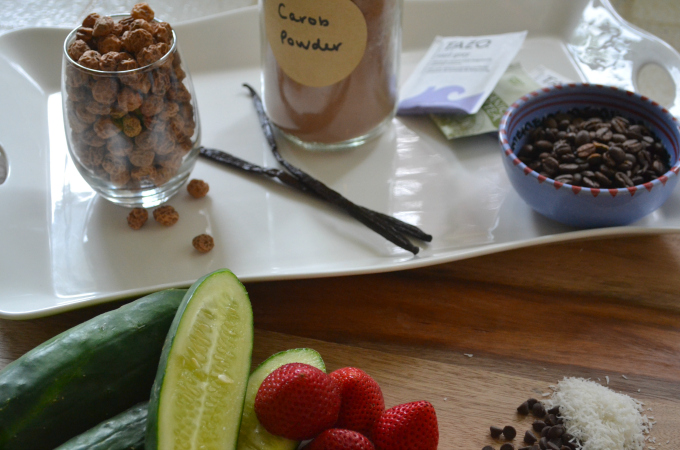 Are there any foods that make you go “hmmm” while following the AIP? I decided it was time to start compiling answers to these often confusing foods all in one place. Read on to get all the deets on “tricky” AIP foods. And, if you have ideas for future posts about other foods you aren’t sure about, leave me a comment. We’ll try to clarify and clear up the mysteries!

Most people know that coffee and chocolate are eliminated initially on AIP, but the “why” is a source of confusion. It is not because they are “beans” and legumes are out. Coffee and chocolate are misleadingly referred to as beans, but they are actually seeds. Seeds contain protective compounds that can be awfully tough on our systems. It is also not because of caffeine content. While caffeine consumption is best kept low on AIP, it is not the basis for food eliminations.

Verdict: Coffee and chocolate are NOT elimination-phase legal.

Okay, before we get started on this one, let it be known that this is a nit-picky area of the protocol. A history lesson could be useful here. Back in the way back, when AIP was first coming on the scene, vanilla was not mentioned as a food to eliminate, it just rested in a no-man’s land. In fact, some of us who started the protocol in those early days never eliminated vanilla at all, as it was not mentioned. Later, it was defined by Dr. Sarah Ballantyne (in her book, The Paleo Approach) that vanilla bean, along with other fruit or berry-derived spices, should be avoided during elimination phase, because the seeds of these plants are ground up with the spice. This allowed for gluten-free vanilla extract (where the alcohol will cook off, so best for hot-preparation recipes) or grain-free, sugar-free vanilla powder (which works for cold preparation recipes). In some cases, those in the AIP community use the seeds scrapped from the inside of a vanilla bean, since they can be consumed without chewing them, like many of the seeds in elimination-friendly fruits (more on that below).

This is often an area of concern for folks trying to carefully comply with the elimination phase of AIP. Foods like berries, kiwis, watermelon, pomegranate, cucumber, zucchini, and even bananas or plantains are not a problem, mainly because we don’t really chew these seeds. Dr. Ballantyne does note in The Paleo Approach that if you aren’t experiencing obvious improvement using AIP, you might consider these small seeds. Why consider them? Because, they do contain small amounts of protease inhibitors. Proteases are a group of many kinds of a digestive enzyme that helps us digest and break apart proteins. For a host of complex reasons, very sensitive individuals might consider this with even the consumption of very small seeds, like those found in the above mentioned foods, if they are having trouble improving their health on the protocol.

Verdict: Fruits and vegetable-like fruits with seeds are elimination-phase legal.

Beans, Peas, and Other Foods from the Legume Family

There’s actually a lot to cover in this category, so let us take it one at a time.

This category includes aloe vera, slippery elm, chia, and flaxseed, all of which produce thick, mucous-like gels. Dr. Ballantyne recommends a great deal of caution with these foods for a number of reasons; they can hinder digestion, in some cases are high in phytic acid or high in phytoestrogens, and are shown to modulate the immune system. All of these effects can be problematic for those with autoimmune disease.

This one confuses lots of folks. Peppercorns come from trees or shrubs and are their fruit, hence why they are removed like other fruit and berry-based spices. Black, white, and green peppercorns all come from the same tree (color is the result of harvesting or treatment processes), while pink peppercorns can come from a different tree family. The heat from this spice is not the same as the heat from nightshade peppers — it is from a chemical called piperine, not capsaicin. In The Paleo Approach, it is recommended to be cautious with pepper and eliminate initially, with a likely early reintroduction. In the early days of AIP, it was one of those foods that was not initially eliminated, but later clarified.

Verdict: Peppercorns are NOT elimination-phase legal.

Folks, let’s put this one to bed…sweet potatoes are not the same as white potatoes. It is not part of the nightshade family, unlike the white potato, which is a nightshade. Sweet potato is a starchy root veggie, different from a yam, but both very nutritious. The flesh can be beige, white, red, purple, yellow or orange, but again, flesh color, even white or purple, does not mean it is part of the nightshade potato family (which we eliminate).

Okay, this is going to ruffle feathers, but let’s clear this one up. Coconut is really different from tree nuts. The coconut palm is not technically a tree, it’s related to grass. All the tree nut allergy folks should now try to calm down (everyone who is trying to get offended, breathe deep…I am in no way insinuating a tree nut allergy is not life-threateningly serious). Dr. Ballantyne recommends that we use moderation with whole coconut and coconut products, due to phytic acid and very high inulin fiber content. This moderation caution doesn’t apply to coconut oil which doesn’t contain phytic acid or inulin fiber.

Stevia is a sugar substitute extracted from the leaves of a plant. Lots of folks in the larger health and wellness community looooove stevia and trumpet its amazingness far and wide. Guess what? It can mess with our hormones in a big way, which is a huge problem for those with autoimmune disease. The science here is complex, but if you want all the nitty-gritty, check out this article.

Verdict: Stevia is NOT elimination-phase legal.

Onions, Garlic, and other High-FODMAP Foods

Certain foods can be high in particular kinds of sugar (the acronym FODMAP stands for the chemical names of those sugars) that, in the case of a bacterial overgrowth in the small intestine (SIBO), can be fermented by the bacteria. This causes incredible bloating, pain, nausea, flatulence, belching, diarrhea, or constipation for those with an overgrowth. Onions and garlic are among the highest-FODMAP foods and are also among the most commonly used on AIP, because we rely so much on them for flavoring. Despite this, we don’t eliminate these foods, because SIBO is not an issue across the board for those with autoimmune disease. IF you have autoimmune disease AND SIBO, it can help to temporarily eliminate or reduce FODMAP consumption, because it helps control symptoms. (Note that controlling symptoms is not the same as treating the bacterial overgrowth. SIBO cannot be treated with diet alone.)

For those with diagnosed Celiac disease or gluten-sensitivity (all autoimmune disease has a very high association with gluten-sensitivity), there are some foods that your body may mistakenly identify as being the same as gluten and begin producing antibodies to that food. The list of the common foods associated with “mistaken identity problem” was developed by Cyrex Labs, which also has a test to help you identify if you have cross-reactivity to any of them. The standout food on the list that many people still consume during the AIP elimination phase is tapioca (the same thing as cassava or yucca). Much like the FODMAPs above, we don’t eliminate tapioca, because cross-reactivity is not an issue across the board and even if you do experience cross-reactivity, it may not be to tapioca. Additionally, some people may not tolerate cassava well due to its high-starch content, but not necessarily because their body is cross-reacting to it. If you aren’t experiencing obvious improvement using AIP, you might consider eliminating cassava to see if you do better or being tested for cross-reactivity. This article has tons of further detail.

This oil is made by cold-pressing the seeds of a flowering plant. It has many therapeutic uses, most centered around female hormone balancing. However, as it is derived from a seed, it is removed during the elimination-phase of AIP. (Caution! If you’ve been prescribed Evening Primrose Oil, it is best to consult with your doctor, before eliminating it. There are possible substitutes, but those decisions should be made with a professional.)

Tigernuts are not nuts. They are tubers which are dried after harvest and then used in a variety of ways (from “milks” to flour). They are very high in resistant starch (starch our bodies can’t digest, sometimes called “prebiotic”), which makes them a food that doesn’t work as well for some folks.

Pectin is a fiber found in fruits, especially apples. It is often used for thickening jams for canning and can be used in baking as a binder. It is best in moderation on AIP, because the extra fiber can be hard for some folks to digest.

Verdict: Baking soda and cream of tartar are elimination-phase legal, but baking powder is NOT.

AIP is a coffee-free (see above), but not a caffeine-free protocol. Green and black teas can be consumed, but due to the caffeine it’s generally advised to drink them earlier in the day and in moderation. It is also important to read labels carefully, as many teas have soy lecithin or other additives that are avoided on AIP. If adrenal fatigue is part of your health picture, you’ll want to work to eliminate caffeine entirely. 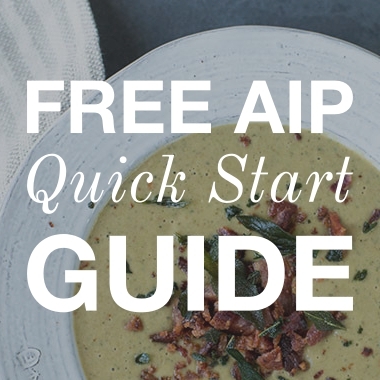 Get your FREE Quick Start Guide